Are SARMs Legal? Check Your Country For Incoming SARMs Bans

The SARMs ban is finally coming. But what does that mean for you? Learn what's happening with the SARMs Control Act and get the latest updates on the ban. 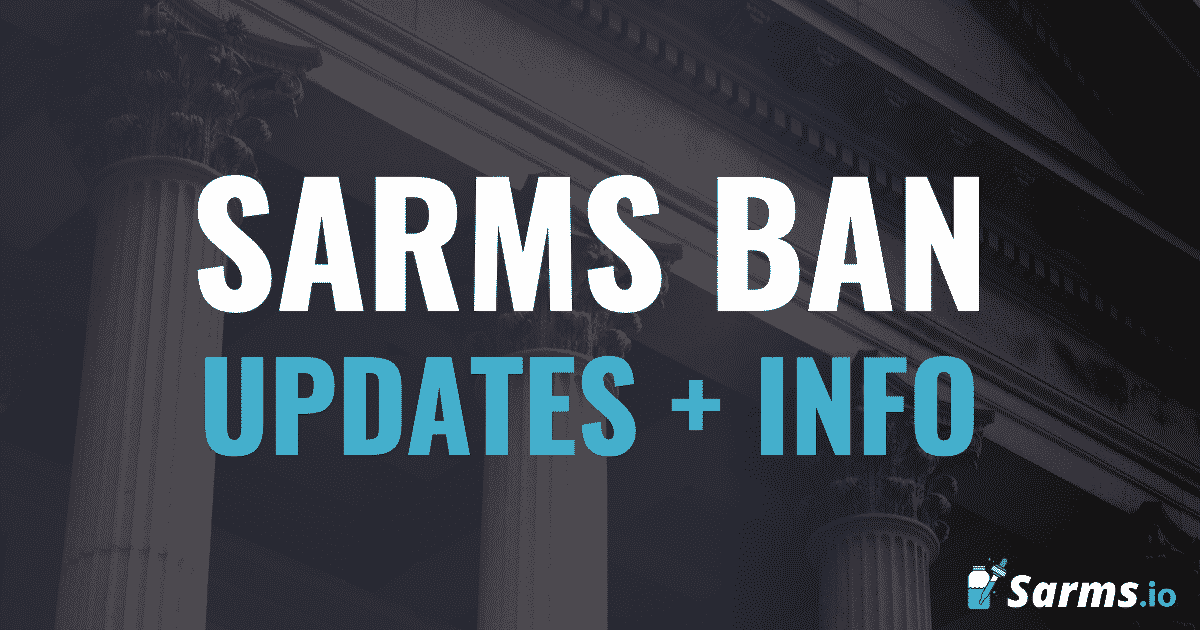 If you’re like me and you’re always looking for ways to get an extra edge in the gym, you’ve probably heard of SARMs. These are a novel class of drugs that are a safer alternative to anabolic steroids. They are touted as a huge help in building lean muscle mass and burning fat.

SARMs have a lot of benefits for athletes, which is why so many competitors have tested positive for them. Some of the purported benefits include enhanced cardiovascular performance and of course muscle gains.

That is why the World Anti-Doping Agency or WADA have banned them for use in competition. But just because they’re banned for drug tested athletes doesn’t mean they’re illegal to buy.

Since the beginning, SARMs have always been available through a legal loophole that enables consumers to buy them as “research materials”. They are bought and sold quite lucratively in the black market and there is a growing number of online SARMs stores that sell these products on the internet.

Now, things are changing. Maybe you’ve heard rumors about a pending SARMs ban. Are they going to be banned in the USA and Australia? This article is going to clear things up once and for all. We will answer these questions:

Are SARMs legal in your country? Check this chart:

Refer to the table below to see if SARMs are banned where you live. I will update this table as more information becomes available.

You should know that many companies will still ship to you even if SARMs are banned where you live. Sarmtech offers a new “customs proof” shipping method that guarantees delivery regardless of where you live. You can read about it in my Sarmtech review.

When is the SARMs ban expected to take place?

In November 2019, China announced the passage of new laws declaring the production and export of SARMs (among other chemicals) as banned substances. This came into effect on January 1, 2020. This is critical because it is the only country that produces raw SARM powder that is used in the production of other SARM products.

So what should we expect with the new ban? The first expectation with such major bans is a shortage of imported SARMs powder in the USA market. This has already begun, with the amount of Chinese suppliers dwindling and resellers marking the prices up higher and higher.

But here is the good news. The supply has not been stopped for companies and brands that buy mainly from China. Many manufacturers have said that they are fully stocked and can handle the demand in the market.

The reality is that there are a handful of Chinese labs that supply the United States with most of its raw SARMs powder. Before it makes it the USA, it gets sold locally to a large number of re-sellers, who then sell it to American companies.

Many people who are familiar with the Chinese government’s trade laws claim that this is nothing but a show, and that China does not intend on preventing factories from producing and manufacturing SARMs.

This may be true, but the fact is that China has already imprisoned people for violating the new orders. 2021 will surely be the year that decides the fate of SARMs.

Are SARMs still legal in the USA?

Unfortunately, there is more bad news. After China made its announcement, the US government reiterated the SARM Control Act (for some reason) which reclassifies SARMs as Schedule III controlled substances. This is the same category that anabolic steroids are in.

This is not the first time the USA has been pushed closer to banning SARMs. If you’re familiar, the SARMs Control Act made it’s way through congress starting as early as 2018. Luckily for us, it never made it to the president’s desk (due to political gridlock, mainly).

With Joe Biden taking control of the Whitehouse soon, congress is expected to start working forward on bipartisan legislation. Included in that workload is the mentioned SARMs Control Act, which is cosponsored by both Republican and Democrat representatives.

It’s impossible to know for sure, but most believe it will pass without interference. Once the bill has been signed into law, SARMs will be in the same class of drugs as steroids and other controlled substances.

The SARMs Control Act of 2020 will effectively ban the sale of SARMs in the United States for good. Once it’s passed, the SARMs market as we know it will be done, and those who try to buy SARMs online will be breaking the law.

I will continue to update this section as new updates come in. As of November 2020, here is the latest status of the SARMs Control Act:

11/19/2019: The bill has been read twice and referred to the Senate Judiciary Committee

Will MK 677 and Cardarine Still Be Banned?

Something interesting is that neither MK 677 nor Cardarine are mentioned in the SARMs control act, because they are not SARMs. I have reason to believe that both of these compounds will remain legal, albeit due to the same loophole that allows the sale of SARMs right now.

Will we start seeing more PPAR agonists and growth hormone secretagogues hit the market if SARMs do in fact get banned soon? I believe so.

Not sure which SARM is for you? Take the quiz on our homepage to get matched with the best right compound for your research.

FAQ and final thoughts about the upcoming SARMs ban

When does the SARMs Control Act take effect?

Once the bill is passed into law, it is expected to take effect at the end of the year. This could change, however, depending on when the bill is signed. It could go into effect as early as 30 days after it is signed. We are confident that 2021 will be the last year that Americans will be able to legally buy SARMs online.

The laws that prohibit buying and selling SARMs vary depending on where you live. You can refer to our SARMs legality table that shows the current legal status of SARMs by country.

How long do SARMs last if I stock up on them now?

Most SARMs have a shelf life of around 2 years before they start losing their potency. You can maintain the maximum shelf life by keeping them in a dark, dry, cold area such as the back of a shelf in a zip lock bag.

Can I bring SARMs with me on a plane?

There is no specific airline policy that prohibits bringing SARMs with you while you travel. It’s best to keep them in a checked bag, and make sure to follow proper TSA guidelines if you are bringing a liquid form in your luggage.

There are theories that such bans are occasionally put in place because of the precarious relationship that the US has with China. Proponents of SARMs say that China holds the cards when it comes to this product because they are the only large-scale producer of SARMs at the moment.

Since buyers have a lot more sway over a market, the US holds a little bit of power. And every once in a while, in an attempt to neutralize that power, China pulls out a wild card.

Either way, it is a crisis when the manufacturer of a product puts a ban in place even if it is temporary. There is likely to be a shortage but is it the end? We will have to wait and see.

Do SARMs Cause Cancer? What Studies Show

Do SARMs Cause Hair Loss? Best and Worst Picks For Thinning Hair

We will be happy to hear your thoughts