Do SARMs Cause Cancer? What Studies Show

Have you heard a rumor that SARMs can cause cancer? Are rat trials just as reliable as human trials? Read this to learn what the science really says about SARMs being carcinogenic. 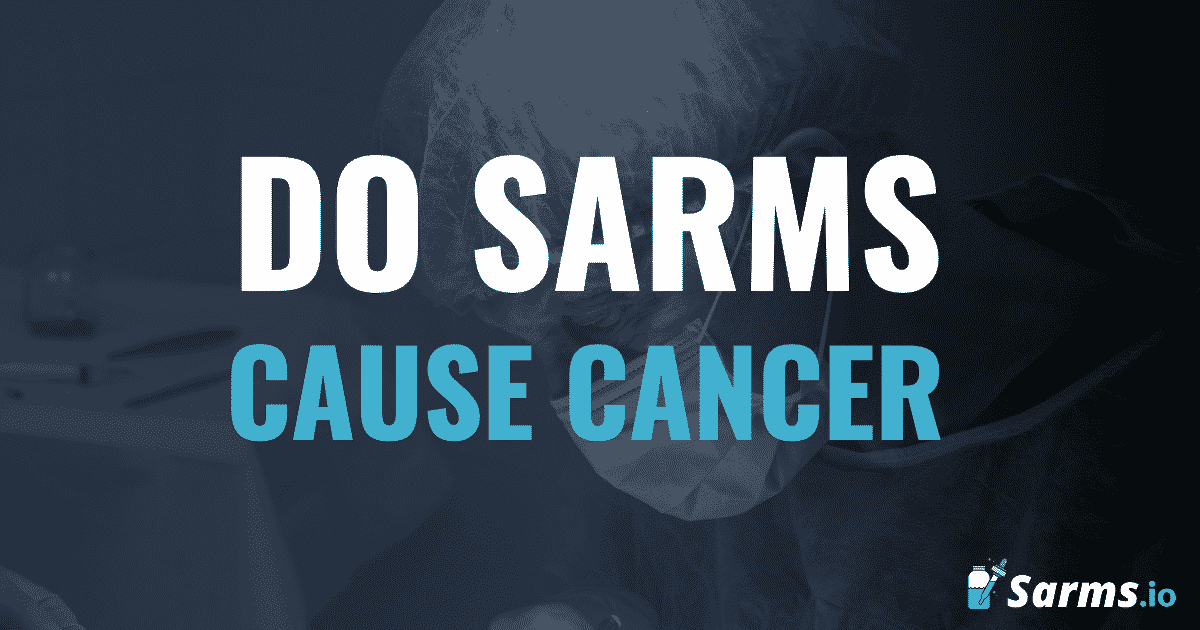 Selective androgen receptor modulators or SARMs are a class of drugs that are said to be safer alternatives to anabolic steroids. Despite not being approved for human consumption, they are quite popular in the fitness community. Especially among those who are fans of bodybuilding.

The US Food and Drug Administration and the World Anti-Doping Agency consider them dangerous and have banned their use. Some even claim the SARMs cause cancer. However, sportspersons have often tested positive after using SARMs for performance-enhancing purposes and continue to use them.

What is the relationship between SARMs and cancer?

The big difference between androgenic steroids and SARMs is that the former products come with a host of unwanted and rather dangerous side effects. They are known to cause an enlarged prostate, shrinking of testicles and development of breasts among men. There is growth in body hair and an increase in the size of the clitoris among women.

The cancer scare began to happen when SARMs were tested on mice and sometimes monkeys and the toxicology reports from those studies showed that these products might cause a range of cancers among users.

But the proponents of SARMs argue that this is because the animal subjects were given a ridiculous dosage for an extremely long period of time. Who is right and do you risk getting cancer if you use SARMs? Let’s see.

Overactivation of the Androgen Receptor

SARMS are a class of androgen receptors that bind themselves to certain tissues and activate androgenic signaling. The first reason for a cancer scare goes this way. If the androgen receptors in your body are stimulated all the time, there is a high chance for a cancer-causing mutation to occur. But mutations among cells occur all the time and our immune system controls them before it goes out of hand.

Now, this is the argument made by those who support SARMs and there is some scientific data to support it. Human beings lose muscle mass and strength as we grow old. This leads to a limitation in movement, physical disabilities and an overall drop in the quality of life.

However, there are not many drugs that can help us with this deficiency. This is also true for physical ailments caused by chronic illnesses like end-stage cancers, renal diseases and heart failure. So, there is a need for drugs that can mitigate this to an extent. So far, SARMs are the only products that have come close to solving the problem.

And unlike steroids, SARMs pick selective tissues and are known to leave the organs of your body alone. So, they do not exhibit the same kind of cancer-causing behavior that steroids do.

The second reason that SARMs are feared to cause cancer is that the disease is basically an unmanageable growth in unwell cells. And drugs that increase growth of cells (you can see why it helps muscle growth, don’t you?) might accelerate that.

While that sounds logical, there is a little more to the story than this monochromatic observation. There are many drugs and supplements which accelerate cell growth without causing cancer. The studies that hinted at the risk of cancer are argued to have been carried on for too long and at a high dosage. If you are going to undertake a SARM cycle, there are guidelines that have been formed informally with anecdotal evidence so that you can benefit from it without so much as getting a pimple.

Does cardarine cause cancer in humans?

This is one of the most common supplements taken by those who want to gain lean muscle mass and burn fat. While it is often categorized as a SARM, it is actually a PPAR delta agonist. These are drugs used to treat symptoms of metabolic diseases.

This is to be taken in cycles with a specific dosage and for a limited amount of time. These cycles are supposed to last from six to eight weeks and the dosage is not supposed to exceed 15 mg per day. If you have experience with these supplements, you can extend the cycle up to 12 weeks and take up to 20 mg per day but not more than that. During this time, you must monitor your diet and train accordingly. You should also keep a written record of the way your body is responding to the supplement and monitor the progress.

If you extend the cycle for longer than that, you are likely to experience some side effects. Plus, it doesn’t help you gain lean muscle mass. Instead, you will lose the benefits of the cycle. Cardarine, in these doses, is not expected to cause cancer. But there isn’t enough scientific data to say that it does or does not cause cancer.

Not sure which SARM is for you? Take the quiz on our homepage to get matched with the best right compound for your research.

Does MK 677 and increased IGF-1 levels cause cancer?

MK 677 or Ibutamoren is another novel drug that is also banned for human consumption but available in the black market. While it does not cause cancer, it might make a bad situation worse and increase the growth of cancer if you already have the disease. This is because it might lead to an increase in the expression of IGF-1 gene.

Bottom line: should you be worried about cancer?

While it is true that there were studies in the past that showed a possibility of SARMs causing cancer, the structure, dosage and time period of those studies is debatable. As of right now, there is no conclusive proof to show that SARMs do or do not cause cancer. In fact, the clinical trials never even reached a point where human testing could be done to prove this way or that.

The tests that were done to prove their use as therapeutic drugs to stop muscle wasting among patients who suffer from terminal diseases like cancer have shown positive results. Researchers say they were “generally well tolerated”. So, while they do not have approval from the FDA and other regulatory bodies, they are quite close to phase III clinical trials.

Meanwhile, it is important that you procure high-quality SARMs to make sure you are not a victim of cheap fakes that have a ton of side effects. You can find some of them here.

Liquid SARMs Recipe: Make Your Own SARMs with Raw Powders

Are SARMs Legal? Check Your Country For Incoming SARMs Bans

We will be happy to hear your thoughts